Jorge Masvidal and Nate Diaz are no strangers to one another. The MMA megastars clashed inside the octagon a few years back for the symbolic BMF championship.

Masvidal fought Diaz in the main event of UFC 244 on November 2nd, 2019. The fast-paced fight ended in a rather anticlimactic fashion, however, as the ringside physician determined that Diaz couldn’t continue fighting due to the cuts around his right eye.

The fight was waved off between rounds three and four due to the severity of the cuts. This was to prevent the cuts from worsening and causing permanent damage to Diaz’s eye. Jorge Masvidal was resultantly declared the winner via third-round TKO (doctor’s stoppage) and was awarded the BMF title.

Fast-forward to the present day, and both Jorge Masvidal and Nate Diaz are looking to return to their winning ways. In an interview with MMA Junkie, Masvidal was asked about potentially facing Diaz in a rematch. ‘Gamebred’ responded by suggesting that he’d love to fight Diaz again, noting that the rematch would make him a considerable amount of money. Masvidal stated: 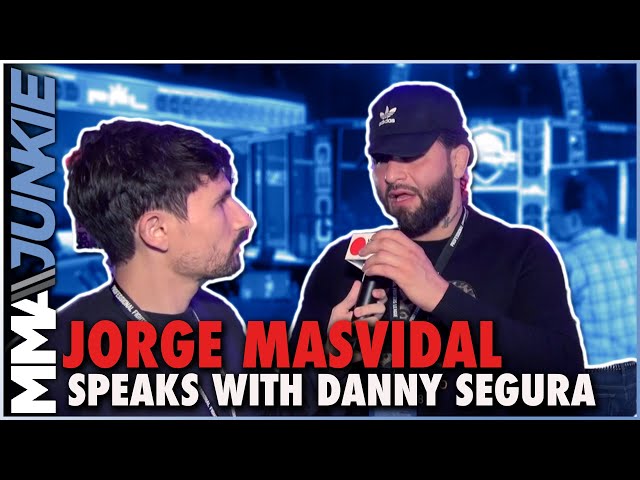 Jorge Masvidal’s most recent fight was a second-round KO loss against Kamaru Usman at UFC 261 in April 2021. The Miami native has suffered back-to-back losses against Usman but has vowed to work his way back to a third fight against him. Jorge Masvidal has emphasized that he still has his sights set on the UFC welterweight title and will capture it before he retires.

Meanwhile, Nate Diaz’s last fight was a unanimous decision loss against Leon Edwards at UFC 263 in June 2021. Diaz was outworked for the majority of the fight. Nevertheless, he had Edwards badly dazed towards the end of the fight, courtesy of a few crisp punches.

Edwards somehow managed to survive until the final bell and take home a decision victory. Regardless, it was Nate Diaz whose stock notably rose in the aftermath of the thrilling fight.

Nate Diaz has recently indicated that he isn’t necessarily interested in pursuing UFC titles. Diaz has asserted that he’d rather compete in the biggest fights that he can, irrespective of the weight class or title implications.